We are excited to tell you that all of Summer 2022’s Boys Camp, Leadership Academy, and House Party (family camp) information has arrived!  Simply click on whichever area you want at the top of the page (icons) and you will be directed to that area of our website.

The Applications to sign up for Boys Camp and the Leadership Academy and the House Party Reservation can be found under “Register Now” on each page’s menu bar.  To sign up, feel free to print them out and send them in.

We can’t wait to see all of you next summer!

In their last year prior to being eligible for Camp Greenbrier’s Leadership Academy, boys fifteen years old are given responsibilities at camp.  The AC’s or Assistant Counselors, are allowed to stay in a tent without a counselor, and they may be asked to stay with a tent full of younger boys at rest hour or after taps, while that tent’s counselor is off duty. 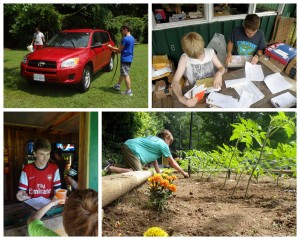 All AC’s are given jobs around camp.  Some sort the mail and deliver it to the Mess Hall, while others sort and deliver packages at mealtime.  Others wash the camp vehicles or clean the bus after boys, dirtied by climbing or caving, have ridden in it.  Five AC’s work in the Jigger shop, serving snacks to the younger boys twice daily.  One helps to maintain the camp garden; and others work for the office, running errands around camp.

The boys have a choice in their assignments, but whatever jobs they may have, the AC’s are taking the first step towards assuming leadership and responsibility. 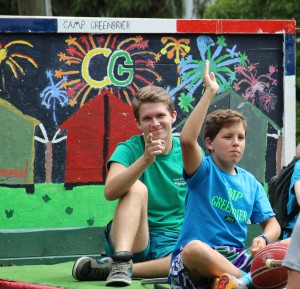 On Saturday we celebrated Independence Day.  In the morning, we walked into the town of Alderson to watch the 4th of July parade.  The parade had wonderful floats, marching bands, antique cars, and much, much more.

Last night after dinner, we went back into town to watch a fantastic fireworks display that lasted for almost an hour.

After the show, we returned to Camp and the comfort of our beds. 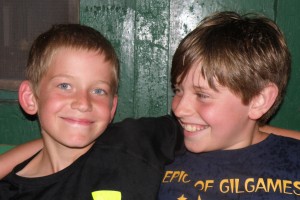 The Boys Have Arrived

The camp feels alive, now that the boys have arrived.

The fields are filled with boys playing soccer, baseball, golf and lacrosse.  Balls are flying across the nets as the boys receive tennis instruction and practice their skills.  Mornings and afternoons the Craft Hall is filled with boys making lanyards and creating out of clay.  In woodcraft, the boys are learning to build, and douse a fire. From the rifle range there is a constant ping as target after target is hit, or not.  Shooting a bow and arrows is a new sport for many.

While the boys taking canoeing are learning the parts of the paddle and the canoe, others are taking swimming, snorkeling and kayaking. 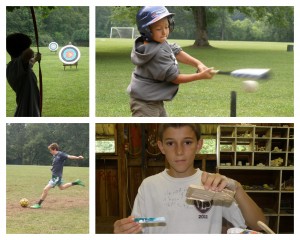 There is no shortage of energy in camp, as evidenced by the number of boys playing on soccer, basketball and baseball teams in the afternoons in addition to their morning routine.  They played their first games (matches) Monday afternoon.  It’s amazing how well the teams are pulling together during this first week of playing together.

Thank heaven the food is so good, fueling the boys’ activities.

With their courses set for the week, their first campfire under their belts, and their trips to the Jigger shop now routine, even the new campers are beginning to feel at home at Camp Greenbrier.

Getting Ready for You

They’re getting ready … for you! 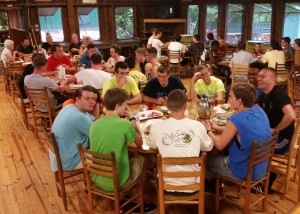 The tents are up; the docks are in; finishing touches are being put on the woodcraft shack, and, finally, the counselors have arrived!  Camp Greenbrier is being readied to welcome campers, old and new.

Forty young men from around the United States and around the world began their training Sunday, June 21, to create the best summer camp experience possible for boys seven through seventeen.

Our counselors hail from North Carolina, Kentucky, Virginia, Georgia, Pennsylvania, Maryland and Ohio.  They have flown here from Spain, Germany, the Czech Republic, England, France, and Ireland.  Some are returning, and some are here for the first time.  All are well qualified to engage, encourage, teach and mentor.

During this week of training prior to the boys’ arrival, they will hear about camp traditions, learn about safety, guidance and leadership, set up their activities, and like the boys, will all have their own swim tests to be sure they’re ready to live on the beautiful Greenbrier River.

They will have eaten the scrumptious Mess Hall food, climbed rocks, shot rifles and archery, canoed the river and experienced most of the activities that occur during the summer.  They will be ready to welcome the campers for another summer of outdoor living, creating friendships, and learning new skills, on the fields and off.

The Woofus has been stopping by some campers’ homes to check on them this winter. In fact, he left House Party guests Michael and Laurie Devine a note. The Woofus reminded them to bring Bear to camp as they often have tea together in the evenings when everyone is at the Big Library. It is hard to say how many homes the Woofus has visited, because it is so easy to forget what you forgot what you remembered when you saw the Woofus.

Anthony and Emily Bream have had their first child

Anthony and Emily Bream have had their first child, a boy named Henry Curtis Bream! He was born on January 13, 2015, in Richmond, Virginia. Anthony, from England, was a long time counselor at Greenbrier who met wife Emily when she was working as counselor at Camp Alleghany, the girls camp about 25 miles from Greenbrier. Congrats to mom and dad!

Memorial Scholarships There are now four named memorial scholarships. They are the Jay Vest fund, the
Christopher H. Clutz fund, The Larkin E. Crouch/Elizabeth Chenault fund, and the Hildy Dennis fund. Donations to these funds, or to the Camp’s general scholarship fund, the Camp Greenbrier for Boys Scholarship Fund, can be made at any time and are much appreciated. To send a donation, simply contact the camp office for details. Donations to any of the scholarship funds help deserving campers, who could not otherwise afford camp, come to camp.